A new museum in Rodez celebrates art and local cuisine, all in one, says Philip Sweeney 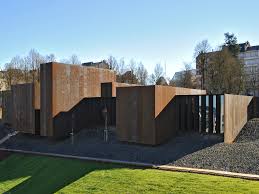 The southern, sparsely populated département of Aveyron is known for beautiful scenery, from the flower-strewn pastures of the high Aubrac to lush winding river valleys. It’s also renowned for excellent catering: many of the café proprietors of Paris were traditionally Aveyronnais. The region’s few architectural wonders – Notre-Dame Cathedral at Rodez, the abbey of Conques and the slim white motorway in the sky that is Norman Foster’s Millau Viaduct – are cerises on the gâteau. This summer however, the Aveyron acquired a new attraction that manages to encapsulate architecture, art, food, and a sort of distillation of the essence of the Aveyron terroir.

Driving up the hill to the centre of the regional capital, Rodez, you used to pass a large car park, lawns, and a 19th-century bandstand, overlooked by a 1980s mini-Louvre pyramid, the departmental seat of government. For decades this was the town’s pinnacle of architectural innovation.

In place of the car park, there’s now a dramatic line of giant boxes in rust-patina sheet steel, cresting a newly planted slope of moorland grasses and flowers. This is the Musée Soulages, opened in May by the President, François Hollande. It was created to house the life’s work of one of France’s most eminent living artists, Rodez-born Pierre Soulages, creator of huge black canvasses worth tens of millions of euros to American collectors. Post-apocalyptic fortress on the outside and brilliantly successful display space within, the gallery has elevated little Rodez to a cultural big shot.

At the same time, in an artfully distressed metal side wing, the museum’s restaurant is upping the town’s culinary ante. Café Bras is devoted to the work of another Aveyronnais star, Michel Bras. He is the proprietor of the region’s temple of gastronomy, the eponymous Michelin three-starred restaurant perched above the cattle town of Laguiole – also known for its cheese and knives – to the north.

To experience the Bras amalgam of luxury and austerity, innovation and tradition at its most exquisite, I drove up through oak groves, hay fields and hillsides grazed by beautiful chestnut Aubrac cattle to Bras’s glass-sided mountaintop eyrie, to be seated at the kitchen guest table with a helicopter pilot who’d ferried a party up for lunch.

The same blend of old-time dishes and state-of-the-art accoutrements characterises the Soulages museum café. This is the Bras interpretation of a modern brasserie, and as at any good brasserie there was a queue when I visited. There was a new Bras invention named the miwam, a sort of stuffed waffle, and a constantly changing repertoire of traditional delights: pascades, thick unctuous pancakes flavoured with onion; three varieties of tripe, once eaten by country folk for breakfast; farçous mini-rissoles and bourriols (sweet potato cakes).

The café is not the only new outpost of the Bras empire, which is becoming something of a gourmet template for south-west France. I travelled to Rodez via Toulouse to visit the brand new Capucin Signe Bras, a rather soigné fast-food café in the chic shopping area around the Victor Hugo market. The capucin is a Bras invention – a conical buckwheat crêpe filled with daily changing combinations: aligot (mashed potato with melted cheese and garlic) with truffle sauce, Roquefort and pears. It’s named after a traditional Aveyronnais cooking implement, a container used to drip fat on to grilling meat, which inspired the shape of the machine Bras designed to turn out his new fast food.

To trace the capucin’s genealogy, I followed the Bras trail south from Rodez down the A75, the wonderfully empty autoroute which swoops through the Massif Central. Just before the spidery, white immensity of the Millau Viaduct, a stone-and-glass converted farm on the hillside constitutes Bras’s take on motorway services, Goûter l’Aveyron. Here, the prototype capucin machine works like a Gatling gun, while cabinets display the finest produce of the region. And not just food: the famous horn-handled Laguiole knives feature prominently. Michel’s brother André, director of the motorway complex, used to run the Forge of Laguiole, which relaunched local production of the knives in the 1980s.

Apart from grub, the Bras outlets offer another considerable resource for the food tourist: a personal address book of the region’s food producers. Source notes may now be a cliché of every UK high-street coffee retailer, but the Bras family take their suppliers very seriously, listing by name the providers of everything from tripe to tomatoes.

The Bras drinks listing is equally impressive: the best of the local wines of Marcillac and Entraygues-le Fel, local gentiane and Ratafia aperitifs, flower infusions …. In the lovely little river town of Saint Geniez d’Olt I visited Bras’s supplier, the Olt Brewery. Proprietor Sebastien Blaquiere was mulling over the plans for the derelict 19th-century café he’s restoring and the bulging order book for his elderberry sodas, Aubrac beers and Aveyron cola. A black lemonade for the Soulages Museum – a homage to the great artist – is on the backburner, but the way business is shaping up in Rodez, it must be heading for the café’s drinks list soon.

The Independent travel offers: Discover a world of inspiring destinations